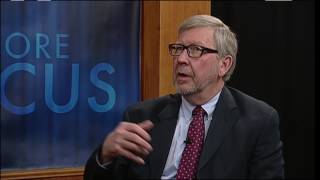 Last February, Shadi Martini, MFA's Director of Humanitarian Relief & Regional Relations, spoke with Keith Kirkpatrick on his show Lakeshore Focus. On March 17th, 2017, Shadi Martini's interview aired on Lakeshore Public Television, Northwest Indiana's PBS station. Martini shared his story and spoke about the realities of the Syrian refugee crisis. In terms of the scope of the crisis, there are currently more Syrians displaced than the entire population of the state of Indian

Update on the Status of the Executive Order on Refugees

In an effort to resolve legal problems identified by the U.S. Court of Appeals for the 9th Circuit in issuing a nationwide injunction against the enforcement of an Executive Order issued January 27, the Administration issued a second Executive Order, also titled "Protecting the Nation from Foreign Terrorist Entry in the United States," on March 6. It was scheduled to take effect on March 16, 2017, at which time its predecessor would be revoked. Both Executive Orders sought, a

Call to Action: Tell Congress & the White House That You Oppose the New Executive Order

URGENT: TAKE ACTION TODAY! Tell Congress & the White House that you OPPOSE the Rewritten Executive Order to Halt Refugee Resettlement and Discriminate against Individuals from Certain Countries A new Executive Order, effective March 16, 2017, will ban travelers from six Muslim-majority countries for 90 days; suspend refugee resettlement for 120 days; and drastically reduce the number of refugees the United States welcomes from 110,000 to 50,000, a historic low. Make no mistak

MULTIFAITH ALLIANCE FOR SYRIAN REFUGEES CONDEMNS REVISED EXECUTIVE ORDER: IT’S STILL A MUSLIM BAN “No one should be fooled by the superficial changes in the revised Executive Order. Efforts to cure procedural problems in the initial order do not change the practical effect: Muslims will still be banned; Syrians will be effectively precluded; a ‘pause’ in admissions will strand vulnerable refugees whose clearances will lapse; and virtually no refugees will come at all given th

Announcement that the refugee resettlement program for 2021 will hit an all time low.

Tell Congress to Stand Against Hate and Protect Our Muslim, Refugee, and Asylum Seeking Neighbors